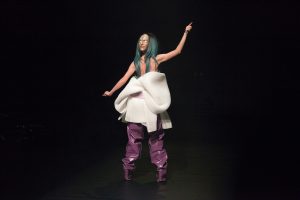 „(…) A complexe, multi-layered, utterly imaginative and powerfully eloquent and poetic work of art. Fankha meanders virtuously between past, present and future, between concepts of identity and gender, between utopias and utopians, between systems of values and their representation, between external and internally defined authorities of our human psyche. (…) The versatile artist’s presence is impressive and so are the fullness of treated subjects, the confidence with which she presents the enormous amount of text, all self-written, her singing voice, her physicality and most of all the suspense she creates throughout the entire 50 minutes. A poetic and subtly profound spectacle.“

„One rarely ever gets to see a performance with a beginning so bewildering and yet so crystal clear. (…) Is this strong beginning going to sustain throughout the rest of the performance? Is the performer going to keep up with it? The answer is: YES! And not only with her multi-faceted physical presence, but also with an exceptionally strong text. (…) Valerie Reding and Malika Fankha place their focus on live transformation and display bodies and corporealities beyond our perceived norms.“ (…)

“Fankha’s potent mix of contemporary dance, spoken word, clever word play, and electronic club beats, is a confessional mix reminiscent of Peggy Lee, Sonic Youth and Kathy Acker. In her loose blue tracksuit and mic, Fankha resembles a sci-fi “Petit Prince”, eternally looping and remixing the microscopic details of existence. (…) Her characters often fail as they posture and pose their way through the various stages of boy, girl, man, woman, lover, and parent. The inspiring use of the English language is as meaningful as it is percussive. Her rapid-fire delivery – part rap, part poetry – plays with words as elements o” sound, one word creating a string of polyrhythmic, rhyming associations. New compounds, such as “microvandalism”, and rhymes like “refuse to defuse” illuminate the toxic emotional minefields that leave scars. The line “lick clits, sick of dicks” is part of a stream of consciousness exposing her ambivalent sexual nature. (…) Like many young performers today, Fankha is proficient with various digital technology. She loops harmonies, beats and her voice in a textual and tonal tapestry.“

„Malika’s body takes and enjoys quite a multilayered journey. Starting as a body/object then moving into humorous statements about her private life and politics, moving from a fragile but convincing stand-up number to then move to the most elastic dance and singing ever. Body identity and definition of herself within a constantly renewed context of representation are to me the agenda of Malika’s work. Doing so she keeps surprising the spectators with her low and high stake issues, without forgetting to be humorous, which is rare enough in our scene to be duly noted!“